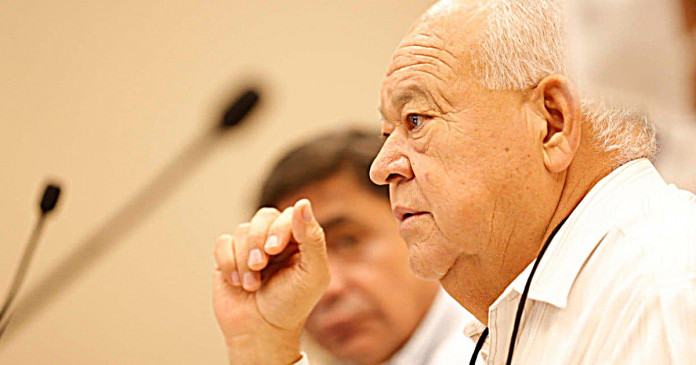 The governor admitted in an interview that he «was unaware of the recent cases of two foreigners who violently died in Baja California Sur.»

The crime was so vicious, that the Federal Bureau of Investigation, known by its acronym as FBI, began an investigation in the United States, in the case of the young Shanquella Robinson, beaten to death in a room in Cabo Villas in the tourist complex from Puerto Los Cabos.

During an interview with reporters, the Governor of Morena, acknowledged that both issues were not reported to him, until Friday, November 18, during his meeting with his Security Bureau.

However, he justified that they were probably dealt with in previous sessions, in which he said he was not present, because he was in Mexico City.

The first case is Rodney Davis, kidnapped and murdered in Loreto. Those responsible, a woman and three men, managed to be arrested after being fully identified, after withdrawing cash with the bank card of the 73-year-old victim.

The second case is Shanquella Robinson, beaten to death by an alleged friend of hers in a room in Cabo Villas. The attack was filmed by a third person who never intervened, but merely recorded the beating that caused a severe neck injury, trauma, and spinal cord fracture in the 25-year-old girl.

«They did not update me on these incidents as they occurred in our state«: Governor of BCS.

«I was not there. I was in Mexico City for several days. Surely in my absence, the matter was discussed during the briefing of the Security Table,” he attempted to justified himself, when he was questioned about the issue of both foreigners murdered in Baja California Sur.

Subsequently, he threw the blame to his officials who, according to what he complained, «did not update him on that information,» claiming, that he was honestly unaware that these crimes had occurred.

Finally, he denied that there was an intention to hide information, he proposed that, to avoid misunderstandings, the State Attorney General, Daniel de la Rosa Anaya, and the media themselves, disclose all the information about these events.