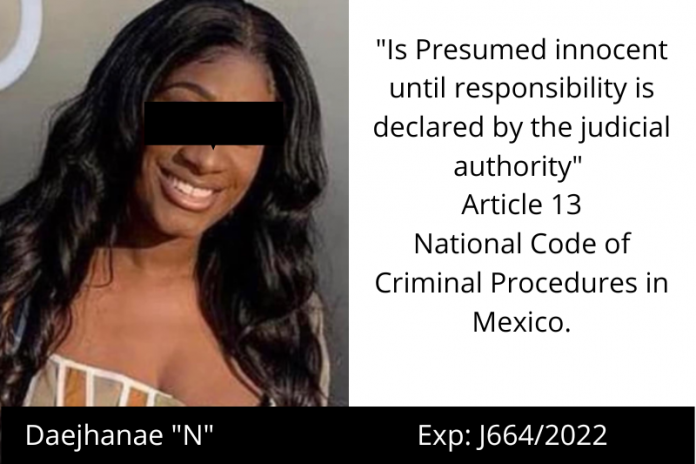 When she steps on Mexican territory, the 25-year-old will have to answer for the horrific crime of her friend, who was beaten to death on October 29 in a condominium of the Cabo Villas complex of this tourist destination.

The Criminal Court of the Adversarial System in the Judicial District of Los Cabos issued an arrest warrant against Daejhanae Imani Jackson, formally charging her with the crime of femicide.

The process, according to the International Extradition Law, must meet the following steps:

The first reason was to identify and locate Daejhanae Imani Jackson to avoid running the risk that she could flee the United States, where she was provisionally arrested.

The second reason was to guarantee the right of innocence of the accused, take care of her due process and not violate her human rights. It is very important that the judicial system not expose the photograph of her arrest, to avoid opening it to public opinion.

Article 311 of the Penal Code of the State of Baja California Sur prohibits «exposing the defendant (accused) to the media in cases in which their arrest is carried out.»

With the New Adversarial Criminal Justice System, the crime against the procurement and administration of justice in Mexico was created, and the following sanctions were established:

The punishment of “3 to 7 years in prison and a fine of 200 to 500 days of salary, will be imposed on public servants in charge of procuring and administering justice or executing sentences, in the position of their assignment, when:

IV.- Exposure of the arrested (accused) to the media, in cases where the arrest is carried out”.

Detained persons may not be introduced to the media for any reason.

When a Control Judge links a defendant to a criminal proceeding and the person is confined to prison, then, the State Attorney General’s Office, can show a photograph of the detainee, but the accused must be wearing a black ribbon around their eyes, with the following writing:

«Is Presumed innocent until responsibility is declared by the judicial authority. Article 13 CNPP”.

In Mexico, like in the United States, a person is innocent, until proven guilty.

For this reason, the State Attorney General’s Office took care of all the formalities in the case of the provisional arrest of Daejhanae Imani Jackson, respecting the principle of innocence, due process and the human rights of the accused.